Before elaborating on the risk factors, let’s review the typical events associated with dog ligament damage. The canine cruciate ligament injury is the thick fibrous band of connective tissue stabilizing the knee, much like a bungee cord. The ligament prevents the tibia from sliding forward as it connects to the femur, prevents tibial rotation, […]

TTA for Torn ACL in Dogs: What You Need to Know TTA (Tibial Tuberosity Advancement) is another commonly performed surgery for a torn ACL in dogs generally performed by board-certified surgeons. It is not necessary to explain the exact surgical procedure since the goals of a TTA are very similar to the goals of a TPLO. Outlining the differences between the two procedures will be […]

TPLO for Dog Cruciate Ligament Tear: What You Need to Know Probably the most common surgery, and most recommended by surgical experts is the TPLO. TPLO (Tibial Plateau Leveling Osteotomy) TPLO (Tibial Plateau Leveling Osteotomy) is one of the most common surgeries and frequently recommended by board-certified veterinary surgeons. Some people also call TPLO surgery“bone cutter”surgery. During TPLO, the tibial plateau is cut in a circular […]

Extracapsular Repair for Torn Cranial Cruciate Ligament in Dogs: What Do You Need to Know? Prolotherapy for Cruciate Ligament Tears: What You Need to Know Prolotherapy, also known as nonsurgical ligament reconstruction, is a medical treatment for cruciate ligament tears and the associated pain. “Prolo” is short for proliferation. The treatment induces the proliferation (growth, formation) of new connective tissue in areas where it has become weak. Doctors primarily use prolotherapy to treat joint pain. Prolotherapy also has been clinically […] 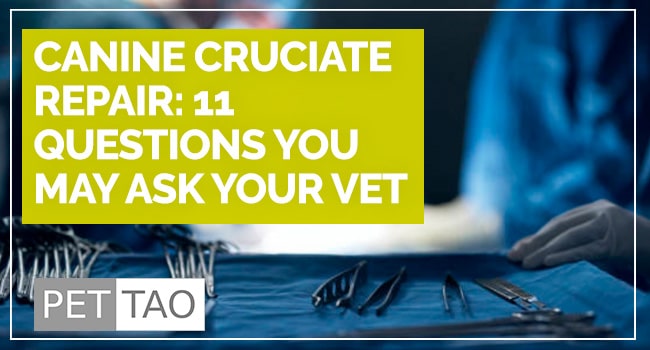 Make the following considerations before making your decision. Question #1: What is the cost for cruciate ligament repair in my dog? The cost of surgical cruciate repair varies by geography and individual surgeon. Expect to pay in the range of $1800-$4000. Just how much you’ll have to spend depends on the surgical procedure performed and […]